Grab bags are randomized and the image does not reflect which sabers/parts you will receive. Per customer feedback SnD bags will no longer contain LED parts, we will do those as a separate listing.

So, I just received my 2 SnD bags. They were ordered after watching videos of people getting theirs and reading reviews. I was excited to receive them but am now more disappointed than excited.

Don’t get me wrong it’s very cool to receive a 10lb box of goodies for making sabers. However when just under 4lbs of that is just a lot of three items then it’s not cool at all. I had 38 pieces of one item!

38? Really? Seems like a lazy way to get rid of stock. I know it’s random and pot luck what you get. But there’s nothing lucky about the people making up these bags just putting loads of the same item in one. I guess they don’t care as they aren’t getting them and it clears their stock. But as a customer it makes me write a review, be very disappointed and will do a very good job of preventing me from purchasing again.

I did get some cool stuff, not saying I didn’t. But customer care doesn’t seem high on the list if this is the normal for their bags. I also got nothing in the terms of electronics either functioning or not. Again it’s random, I get that, but it’s still a let down to get nothing of one thing and a mountain of something else.

If I’m honest I’m torn on this as a purchase, it’s a very cool idea but all the time they just throw loads of the same thing in peoples bags …well that makes it a not good deal at all for the buyer. I’m left regretting my purchase rather than loving it which, if there had been more variety and less of the same stuff, I would have done.

Have included some photos. One to show the variety of stuff I got the other two to show the three items I got to the extreme…😕

I'm definitely NOT an experienced DIYer, but I'm the next best thing: ADHD!
I halfway hoped I'd get a full set of electronics out of this, but I wasn't expecting anything. I DID get a handful of lights -- one is a plug-and-play, warrior kit I think, so I can't test it yet -- and one of them works (about what I expected, they warn you you may get non-functional LEDs)! But I also got a BUNCH of random parts, which I was able to make a couple of lightsabers out of, one being a staff!!! (See the attached pictures) I'm also a track and field athlete, I run distance and occasionally get to do a distance-specific relay so I can use some of the parts to make a practice baton for handoff practice!! It's a bit hefty for races, but it works for practice!
I did get an interesting part that I think must be from an old model; it looks like a combination of switch and emiter? I'm gonna attach a few images of it, if Saberforge may be able to tell me! I'm absolutely intrigued!

First off I would like to explain to the people that don't give this 5 stars. This is a SnD grab bag. If you want a complete saber buy a complete saber. I have purchased eight bags over the year I have been able to build numerous (estimate 9+) hilts. People that complain that they can't get any, Phil explains when he's going to release them. If you will set at your computer 5 minutes before you will have absolutely no problem purchasing them. You don't necessarily need a saw, drill press or any fancy tools to make this work. If you have a little bit of creativity and take your time you will enjoy. There are lots of builders that use these parts for all the nice Sabres you see on Facebook. Think outside of the box . You can get aluminum tubing for a shroud. MH$V2 male threads will thread on to most ASP parts but not the other way around. I got lucky and had some that thread perfectly with other saber companies. That being said it's a gamble. It's a lots of fun. I will buy them every time! I will leave some pictures 95%
of the parts were from scratch and dent bags. 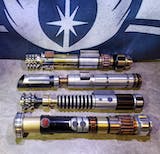 This is the first time i saw this package was available. I had to buy it. Wow.. what an incredible selection of parts. I can't wait to get another S&D box.

R
Rees Harward
Really need to put more of these together...

Missed the notification by 10 minutes and they were already sold out. Very disappointed. Been waiting months.

Returns are eligible within the first 15 days of delivery. Due to the custom nature of our product, items may only be returned for store credit or exchange. Returns must be in new or like-new condition.

Orders requiring a custom finish, or specialty wrap, or are made from Adaptive Saber Parts are final sales and cannot be canceled, changed, returned, or refunded after the order has been placed.

Orders are custom-made and cannot be canceled unless the order has exceeded the lead time provided at the time of purchase. In the case of an unmet lead time, you may request a cancellation. A 10% restocking fee may be applied to your cancellation

$129.99
Use left/right arrows to navigate the slideshow or swipe left/right if using a mobile device